In Cheb Accolade and Panattoni have built the most environmentally friendly industrial building in the world.

The revitalization of the derelict site of former Cheb engineering works, 90% recycling of construction and demolition waste and the environmentally friendly construction of a unique modern hall, in which rainwater is used for flushing toilets, window blinds provide shade from sunlight, and the surrounding grounds can boast having an insect hotel and an outdoor gym for employees. And so was born the main distribution centre of the German online retailer, REAL digital, which has recently been certified as the most ecological industrial building in the world according to the latest BREEAM standards 2016 New Construction. The project of the industrial zones builder Panattoni and the investor Accolade was the first in the Czech Republic to receive an “Outstanding” mark and a record score of 90.68%. 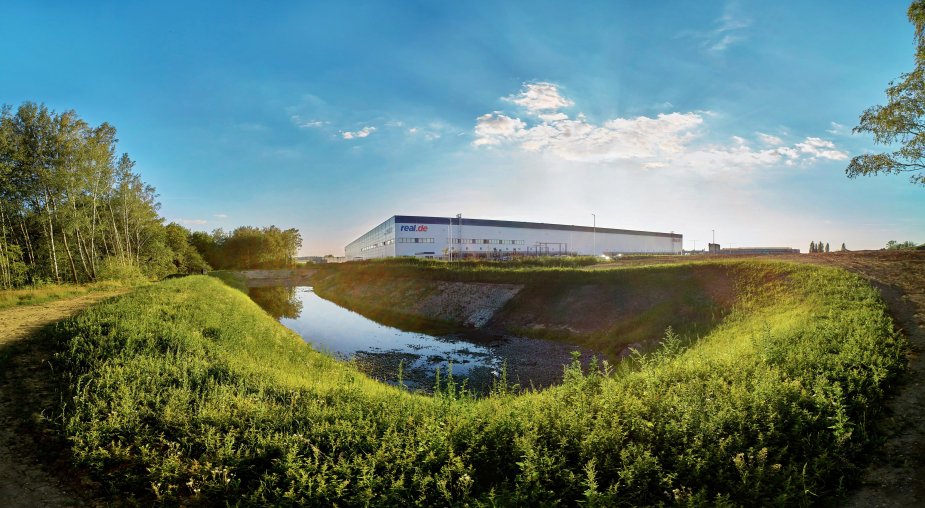 “The Czech Republic has the most environmentally friendly hall for modern industry in the whole world in Cheb. It is the culmination of the path of green building construction, which Pavel Sovička (Panattoni) and I set out on in 2015. And thanks to this, we now have one of the greenest portfolios in the world, in which a high proportion of regeneration of old brownfields with a long industrial tradition also plays a crucial role. I am glad that the Czech Republic is at the forefront again and that modern halls have received such a prestigious award. The stamp of the most ecological approach to the world around us. Yes, those halls that are often wrongly referred to as wasteful boxes. I would like to thank the entire team that participated in the construction and preparation,” said Milan Kratina, CEO of Accolade.

You will come across sustainable development in the building literally on every one of its 27,000 square metres. But its most impressive parameters are in its water management, which corresponds to the increasingly relevant impact of climate change. Thanks to a unique system of flushing toilets with rainwater, it has been possible to reduce the consumption of drinking water by an incredible 84% compared to the industry standard.

The hall is also equipped with smart LED lighting, measuring, and optimizing energy consumption and exterior blinds, which significantly save the energy needed to air-condition the premises. All this contributes to a 56% reduction in energy consumption and a 58% reduction in the carbon footprint. All the selected building materials were chosen with ecology and sustainable construction in mind. Many of the materials (more than 12%) have one of the ISO 14001, BES, or FSC certificates as well as the Environmental Product Declaration (EPD). The quality of the indoor environment, which takes into account working conditions for employees, also contributed to the high evaluation of the BREEAM 2016 New Construction certification.

“The fact that the Panattoni Park Cheb South project has achieved an Outstanding BREEAM rating is a testament to the leadership and vision of the client and the hard work and dedication from the assessor and wider project team. It takes the delivery of a truly sustainable vision to achieve an “Outstanding” rating not just by focussing on a specific set of sustainability issues but by looking at everything in parallel. The whole team can be rightly proud of this achievement that will not only serve as a beacon of the possible for other projects in the Czech Republic but others around the world,” said Shamir Ghurma, Director of BREEAM, which conducts sustainable development certification worldwide.

“Although it was a challenge to aim for the highest level of certification – Outstanding, this project was unique from the very beginning. Superior solutions have been incorporated here, such as a rainwater flushing system, safe access for pedestrians and cyclists, an outdoor rest area, diverse greenery with locally native species, the reuse of demolition materials, and much more. This, together with the excellent cooperation from all stakeholders with our team, led to the highest BREEAM certification for a newly built building in the Czech Republic,” said Malgorzata Sochacka of Arcadis, which led the BREEAM certification process.

“I am pleased that we are building the most environmentally friendly buildings in the world here in the Czech Republic, and after Amazon in Dobrovíz, which at the time it was completed had the highest world rating of BREEAM certification, the building we have just built again takes the global crown. The distribution centre building in Panattoni Park Cheb South has set the bar in the field of sustainable construction extremely high with a record score of over 90%. But I believe that somewhere in the more than 2,000,000 m2 of buildings that Panattoni currently has under construction in Europe, there will soon be another building that will raise the bar we have set even higher. Coincidentally, it is an identical area of 2,000,000 m2 that we have already been able to certify and deliver to the market. This only confirms our position as a European leader in sustainable development,” added Pavel Sovička, Panattoni’s Managing Director for the Czech Republic and Slovakia.