Accolade Industrial Fund had a successful 2021. Its performance exceeded 20 percent last year, an all-time high. The fund's portfolio had grown to include more industrial parks, and the total leased area exceeded one million m2. Over 2,200 qualified investors have already invested in the fund. 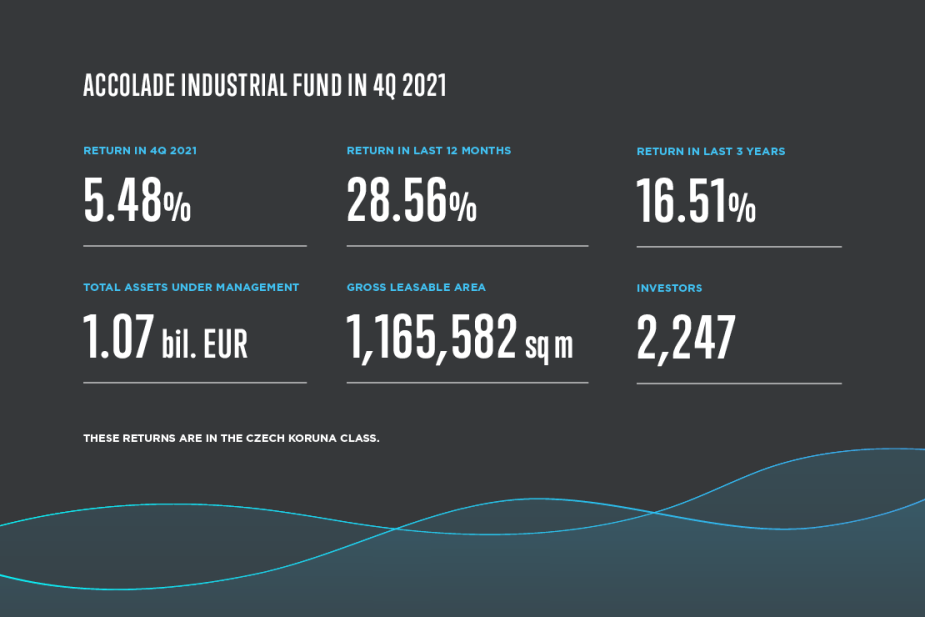 Several factors, largely reflecting recent shifts in a globally connected world, suggest a positive development for the future. One of the longer-term trends, accelerated in the last two years by the covid pandemic, has been a change in European consumer behaviour, with Europeans now shopping online much more than they used to. This increases the interest in industrial facilities from logistics and e-commerce companies.

“Demand for facilities is still high and drives their value up. I expect our portfolio to grow dynamically this year as well. Moreover, a growing number of companies are realising that modern logistics and industrial facilities are a necessary prerequisite for the sustainability of European businesses. It is necessary to bring key production as close as possible to the engine of the European economy, i.e. Germany, but also to other countries, including the Czech Republic,” explained Milan Kratina, CEO of Accolade.

The year 2021 was also marked by a continuous, strong growth of industrial real estate prices. This was mainly due to the fact that industrial real estate was high in demand among large institutional players, who previously focused on premium shopping centres or offices. "There were many transactions last year, which influenced the valuation of our parks, increasing the fund's returns, despite them being rather stable for the previous six years," Kratina added.

The fund successfully completed several acquisitions in 2021. The Polish portfolio grew to include the Minsk Mazowiecki industrial park; in Slovakia, the fund purchased a site near the Košice airport; in Germany, it acquired a park in Bochum. Furthermore, to support their expansion, a number of existing clients signed new lease agreements for additional space in facilities owned by the fund. There are some new tenants, too, such as the global logistics company DHL, which signed a lease agreement for space in the fund’s facilities. The company expanded by more than 20,000 m2 in the modern industrial park in Zielona Góra, which was one of the fund’s first Polish investments. The logistics company Raben and the InPost company, a European pioneer of e-commerce boxes, also took over their new premises. InPost leases space in five other industrial parks owned by the Accolade fund –⁠ Goleniów, Białystok, Bydgoszcz, Szczecin and Częstochowa –⁠ in addition to Zielona Góra.

Tenants in the Czech Republic are interested in more logistics space as well. Last year, for instance, for the third time since 2016, Tchibo expanded in the Cheb park. The total area of the expanded Tchibo distribution centre now exceeds 100,000 m2, making it the second largest industrial rental building in the Czech Republic.

The fund also puts emphasis on the environment and sustainability; Accolade's portfolio is one of the most environmentally friendly in Europe. Diversification and reliability of tenants are also key for the fund, ensuring stable returns in the long run.

“We expect a similar development in 2022, despite the fact that the conflict in Eastern Europe has tragically marked the beginning of the year. The performance of our fund will not be significantly affected by the events in Ukraine, however. Accolade Industrial Fund does not have any projects, tenants or financing banks in Ukraine or Russia and we were not planning on entering this region in the future,” commented Kratina.