Accolade Industrial Art brings another mural to the industrial park – this time in Gorzow Wielkopolski. The artwork, like other 2 on water tanks in, Zielona Gora and Minsk Mazowiecki, was designed and created by two recognized mural artists – Jakub Bitka and Łukasz Chwałek. 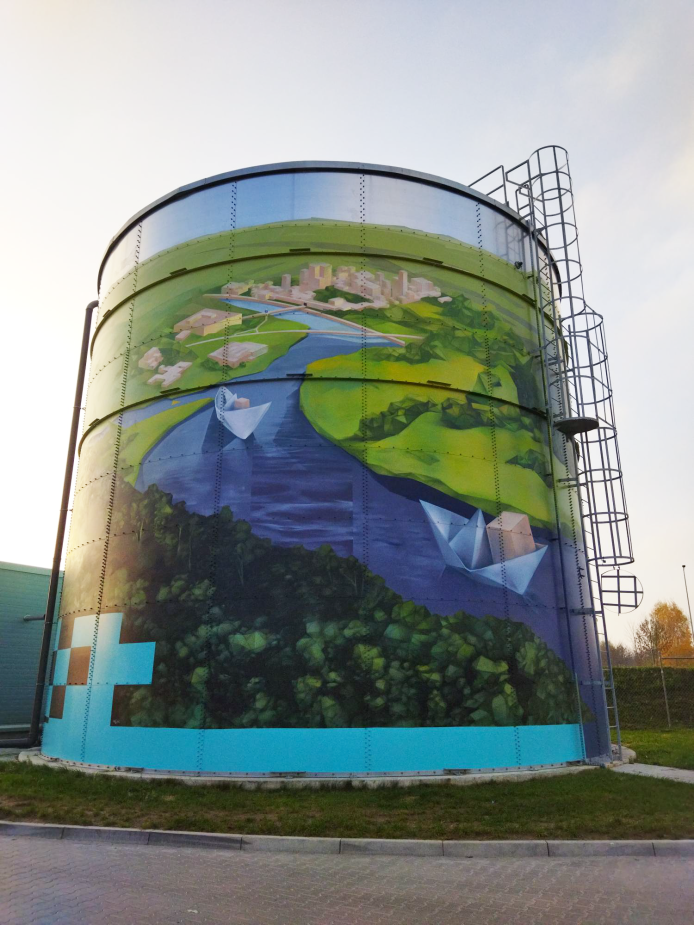 Inviting art into the industrial areas is the mission of Accolade Industrial Art and a part of the Group’s ESG strategy. – This is already our fourth mural that brightens up industrial spaces in Poland. We can see how they become the favorite eye-catcher for our tenants, and we received a lot of positive feedback on that. We are happy that we can implement our ESG strategy in such a tangible way. The murals really make a positive difference to the landscape. We also conduct educational activities for young people in the cities where we operate. This time, in Gorzów Wielkopolski, we showed how to paint a mural to the students from the High School of Fine Arts. – says Małgorzata Więcko, Director Asset Management in Accolade Poland.

Once again Accolade invited Jakub Bitka and Łukasz Chwałek – two recognized mural artists - to create the painting. - The visual concept for the mural is inspired by the river Warta, which flows through Gorzów Wielkopolski, and is a recognizable landmark of the area. Our project incorporates images of the river as an age-old means of transport and distribution, and thereby also metaphorically references the activities of those local businesses operating within the Accolade Park. The figure of the girl who launches traditional paper boats calls to mind the innocence and enthusiasm with which human beings originally interact with Nature. As such, the mural thematically invokes the ecological connection between us and our surroundings. The image of child and the city, brings such a correlation between an idea and its realization, the individual and society, and our present and future. – explained Jakub Bitka.

- The view of the undulating river reflects the contemporary cityscape of Gorzów, situated on the Warta; however, a more futuristic vision of the city and its shops, as imagined by the child, merges seamlessly with the depiction of present-day Gorzów. This introduces an element of the child’s psychological reality. The mural will provide the workers of the industrial park with a refreshing and relaxing invitation to contemplation as they go about their day. -added Łukasz Chwałek. The mural is located on the water tank and can be well seen from the street.

Accolade Industrial Art’s mission is to introduce art in industrial premises. The first project under its patronage was a mural on the wall of the industrial park in Białystok, then the murals in Zielona Gora and Minsk Mazowiecki followed.

- It is great to see how Gorzow Wielkopolski is becoming the city of murals. The Accolade artwork is another great example of art being initialized and created by companies operating here. We hope it will be a fantastic inspiration for others to similar activities – said Jacek Wójcicki, City of Gorzow.

Good morning! Our website uses essential cookies to ensure its proper functioning and analytical cookies to let us know how the users interact with our site in order for us to improve it. More about cookies here.