The Tchibo distribution centre in Cheb has become the largest industrial building completed this year in the Czech Republic.

The expanded Tchibo distribution centre in Panattoni Park Cheb was grand opened today. With the completion of the third phase of construction, adding approximately 30,000 sqm, the hall, totalling over 100,000 sqm, has become the largest industrial building completed this year in the Czech Republic. The developer Panattoni together with the investment group Accolade are standing behind the expansion of the industrial space. Since the first phase of construction in 2016, the tenant has been Tchibo, one of the world's most important coffee producers and consumer goods retailer. The new part of the site aspires to a high BREEAM New Construction environmental certification rating of "Excellent". 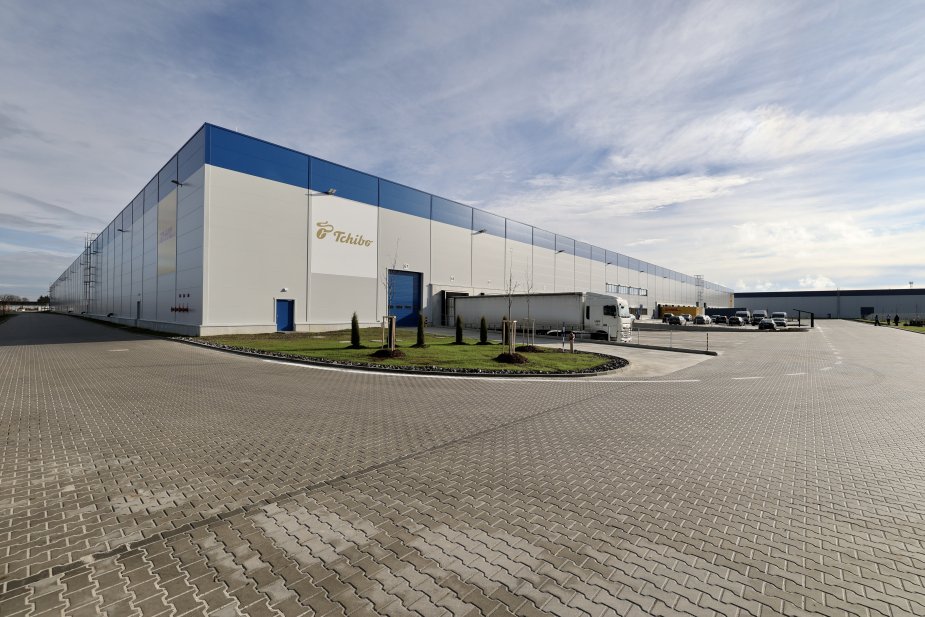 The value of investment after the expansion will reach almost EURO 30 million, the leasable area of all phases will exceed 100,000 sqm and the warehouse will offer 57,000 pallet spaces and 60,000 spaces for cardboard boxes. Until now, it has served exclusively as a B2C centre for e-shop of Tchibo, but after its expansion and the addition of new technologies next year, it will be also used for the return part of B2B logistics processes relating to Tchibo stores and depots. Like Accolade and Panattoni, Tchibo is committed to business sustainability. In addition to certifying the buildings at a high level of sustainability, the company has changed the way it transports goods to Cheb, using full trains with containers instead of trucks arriving close to the German-Czech border, and using trucks to transport containers only the last kilometres.

“I am delighted that this important milestone fell on the thirtieth anniversary of Tchibo in the Czech Republic. The expansion of the distribution centre shows our clear commitment to Cheb and to the Czech Republic, as a fundamental building block of our European logistics strategy. We see the industrial park in Cheb as a highly functional logistics centre and a great starting point for the distribution of our products. It works perfectly for all countries involved in e-commerce and constantly confirms its importance,” says Richard Hodul, General Manager, Tchibo, Prague.

"We are delighted to have been able to contribute to the anniversary celebrations of Tchibo in this way. We are very proud of the industrial park in Cheb. Our goal is to contribute to the growth of the Karlovy Vary region and, thanks to the competition on the labour market and the related wage growth, to make it step by step the Czech Bavaria," adds Milan Kratina, CEO of the Accolade Group,“ adds Milan Kratina, CEO of Accolade Group.

"When we entered Cheb in the middle of the last decade with the vision of a new industrial zone, we were condescendingly complimented for our courage in trying to reach the western market with a different region than Pilsen. Tchibo was one of the first tenants and, to be honest, it was quite difficult to convince its representatives to go for this location. In the end, however, it turned out to be the right decision and the Karlovy Vary Region can act as a full-fledged second gateway to Germany alongside the Pilsen Region. The Czech Republic has always been the business crossroads of Europe. I am glad that, thanks to Tchibo, this is beginning to be true again. Thanks also go to the town of Cheb for its long-term support,” says Pavel Sovička, Panattoni's General Manager for the Czech Republic and Slovakia.

"I am pleased that our city has become so attractive for Tchibo that it is strengthening its presence and expanding in the city. I also appreciate the emphasis on minimizing the environmental impact of the new building. The amount of resources invested and the implementation of advanced technologies in its interior are proof that the chosen location is promising for Tchibo and that it plans to be present here in the long term. I wish it every success!" said Antonín Jalovec, Mayor of Cheb.

Tchibo is one of the largest coffee producers in the world and the market leader in roasted coffee in many European markets, including the Czech Republic. In the Czech Republic, it is also the market leader in coffee refreshments and one of the largest international retailers. It offers its products through a multi-channel distribution system consisting of a network of Tchibo stores, an online shop, and a network of shop-in-shops in selected retail stores. The company was founded in 1949 in Hamburg, Germany, where it is headquartered. The company entered the Czech market in 1991.

Since last year, the logistics company DHL Supply Chain, another tenant in the Cheb park, has also been cooperating with Tchibo. The Tchibo distribution centre is already the third facility where DHL Supply Chain is focusing on e-commerce. “We are very pleased to have been trusted by Tchibo and to be able to support them with our services in their steady growth. The fast-growing e-commerce sector places particular emphasis on speed, flexibility, and reliability. This requires not only a significant amount of know-how, but also a strong partnership, which we have been able to build with Tchibo and which we value immensely,“ says Peter Okenka, Regional Director DHL Supply Chain.

The Cheb industrial park is one of the best in Central Europe, according to the evaluation of experts who compared industrial parks across Central Europe as part of the CIJ Awards 2017. Cheb was rated the best park thanks to the sustainable construction of the Panattoni development company and the Accolade Group's investments in industrial rental buildings for DHL, BWI, and Tchibo. And it was the building for Tchibo that won another first place, when it was selected as the best single industrial building for rent.