Bohumil Šimek, Governor of the South Moravian Region, launched a new special Rosenbauer Panther fire engine for airport firemen at the Brno-Tuřany Airport today. It was purchased as part of the huge investments in passenger safety and comfort by the airport operator, which is now part of the Accolade Group. 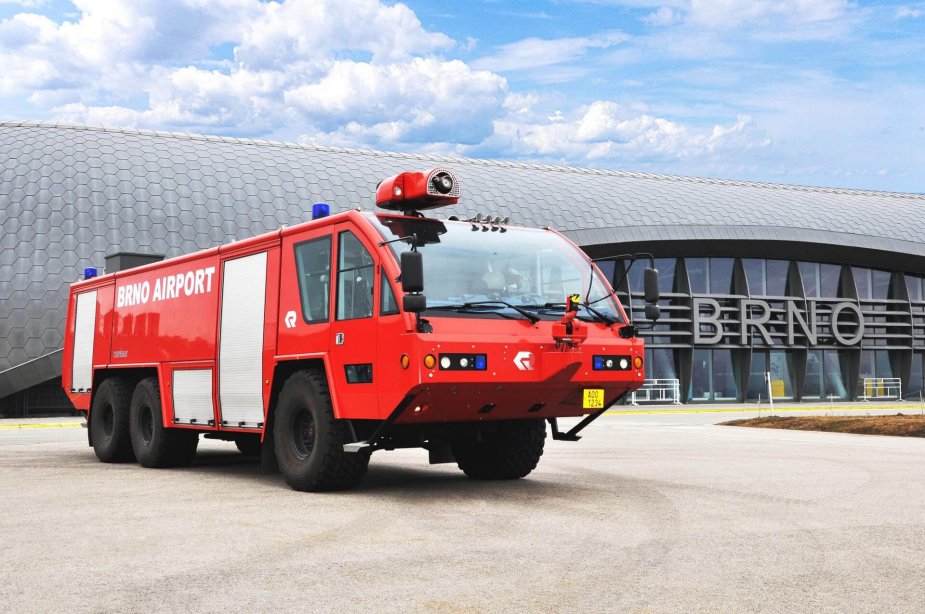 “I’m glad to see that the new leaseholder has brought new energy in the operation of the airport and that we have maintained positive regular communication since the very beginning. It is a primary objective of the South Moravian Region to support sound development of airlines in the long term and ensure that the air routes expand to further attractive destinations.  It’s too early at the moment to talk about specific dates and destinations, but I hope the Brno airport will soon – still this year – offer regular service to more destinations in addition to the existing flights to London and Munich. South Moravia needs it for its development and the Regional Authority will make its best efforts to boost these endeavours,” says Governor of the South Moravian Region Bohumil Šimek.

“We have a common goal with the South Moravian Region: to develop the airport in the long term and to make it an attractive and busy gate to South Moravia. I am happy that we as the airport operator are directly involved in the team that has begun negotiations with several airline operators about connection flights from and to Brno,” says Milan Kratina, co-owner of the Accolade Group and Chairman of the Board of Directors of Letiště Brno a. s.

Besides the special airport fire engine, the airport has also bought covered mobile passenger stairs – the very first passenger stairs with a roof at the Brno Airport to protect passengers getting aboard or off a plane in bad weather. In addition, a new aircraft tug has been added to the fleet of airport vehicles – it is able to move even large bizjets, thus making aircraft handling easier, increasing the airport’s apron capacity, and improving the comfort of passengers and private plane crews. "Over several months, the Brno Airport spent 30 million crowns to improve passenger safety and comfort, and another ten million to do construction work,” explains Milan Kratina, and adds that the costs are partly covered from the State Fund for Transport Infrastructure (the Airport Protection Programme).

The airport is expanding the passport control capacity for non-Schengen passengers and installing new X-ray machines and prohibited substance detectors. Additional garage bays have been built for the new fire engine and other vehicles. Major investment projects include a new fence made of modern 3D panels, guarding the runway and adjacent taxiways and meeting the latest security requirements. Funds are also provided for expanding the car parking area in front of the terminal and for building a new airport infrastructure, including water and gas backbone distribution systems, whose construction is now starting. Inside the airport lobby, innovative ventilation and air conditioning systems have been installed in the passenger area as well as in the technical and service support areas.

At the same time, a road bridge over a railway is being repaired on the access road to the airport terminal. The necessary repair work, undertaken by the Regional Authority, causes intermittent traffic slowdowns. During the top season, traffic will be controlled by lights responding to traffic situations; however, passengers should remember that it is always recommended to arrive two hours before departure.